Fair trade labels are cropping up all over the produce section. And fair trade bananas are some of the most common fruit and vegetables with that label. That’s why a few months ago, I joined Equal Exchange and a handful of representatives from co-op food stores and natural foods distributors on a trip to Ecuador. The goal: to understand a bit more about what fair trade means for bananas, and for produce in general.

Don Hugo is the picture of a thriving small-scale farmer. One of the founding members of the AsoGuabo co-op, his plot shows the results of sustained, long-term investment. Swinging his machete to punctuate his stories, he shows us around his nine hectares of bananas plus his wife’s 4 hectares of cacao.

Unlike so much of the fruit we see imported, bananas really do have a year-round season. Once a week, Don Hugo’s workforce expands to pick and pack the bananas, bringing in family and neighbors. Each banana tree grows just one mega bunch (a racimo) in its lifetime. Once harvested, the tree is chopped down to begin again. A worker swings the huge, 40-pound racimo onto a pillow on his shoulder to lug it back to the packing station where it will be cut up into supermarket-sized bunches, sanitized, and packed into cases.

The impact of many years of fair trade premiums are everywhere. A banana cable line snakes around the property, a labor-saving investment to help haul the hefty racimos back to the packing shed while giving workers’ shoulders a break. The shed itself is immaculate. A roof, sprayers, washing tanks, toilets—all the ever-multiplying safety and sanitation protocols required for small-scale farmers to sell onto the global market.

Don Hugo is relatively well-off with good productivity and a good-sized plot of land. Yet the odds of him exporting on his own are about as likely as a farmer with just a few cows selling milk to Safeway. That’s where the co-op comes in.

A little word problem for you: Each banana tree yields just one 40-pound racimo, which packs down to just one grocery store case. Don Hugo can harvest about 40 of those bunches per week off each hectare of land. It’s about 48 boxes per pallet, which means that he’s getting about nine pallets per week. That sounds like an awful lot of bananas until you consider that the shipping containers used to transport them hold 20 pallets, or 1000 boxes. Even one of the most productive small-scale farmers wouldn’t be able to fill that before the fruit turned to mush!

That’s why all over the region, small-scale farmers are packing bananas on the same day. We meet up with a few of them at the co-op’s central warehouse later that night. Box trucks come and go, depositing pallets of bananas. It’s well past sunset and even though their days began before sunup, farmers linger, waiting on QC approval before their carefully packed pallets get loaded onto shipping containers.

Bananas are big business in Ecuador. They’re everywhere, trees line the roads, thick as corn in Iowa, and make up 80% of the country’s exports. Most of these bananas don’t come from this sort of small-scale farmer supply chain however. Those household brands Dole and Chiquita? They’re huge here too. Their logos are on the massive packing sheds that crop dusters buzz over, their logos are on trucks and on shipping containers. Dole even has its own dedicated port. As these small-scale farmers wrangle a spot for a few containers on someone’s ship, their biggest competitor owns not just whole shipping containers, not just whole boats, but an entire port. The difference in scale boggles the mind.

AsoGuabo is a strong co-op, professionally managed and well-established. They are consistently able to sell between 90-100% of their production on fair trade terms, meaning that they get the advantage of both a slightly higher price plus the organic and social premiums. In short, if any small farmer organization could survive, and thrive, against that sort of competition, it would be them.

There’s another farmer in this story too. Several hours up a rutted dirt road, high in the mountains, the vast banana monocultures give way to a mix of tiny plots of coffee, cacao, chickens, and scattered banana trees. That’s where we meet Wilmer. His farm is the opposite of Don Hugo’s in so many ways. Instead of neat lines of the same kind of bananas everywhere, it’s a tangle: Three different kinds of bananas, plus a mix of cacao trees.

While Don Hugo’s was bustling with activity, it’s quiet here at the end of the road—and even the road has only been here for a few years. Before that, the only way to carry things down the mountain was on a donkey. Wilmer’s plot is smaller too, 4.2 hectares, about one third the size of Don Hugo’s, and his weekly banana crop is smaller too, just 15 cases per hectare per week because he grows several other crops.

Globally, the average small-scale farmer has about as much land (or less) than Wilmer. There are a whole lot more farmers like Wilmer out there—they grow 70% of the world’s food after all. He is selling his bananas to the co-op, but the diversity of his farm means that he’s almost too small to provide meaningful volume. He’s far from the co-op, making each transaction just a bit more work. All the economies of scale that seemed like a struggle down in the lowlands are multiplied up here in the mountains. If it would take Don Hugo three weeks to fill a shipping container, it would take Wilmer 3-4 months.

Agroforestry: A Promising Path for the Future

This juxtaposition between the two farmers is a micro version of the dilemma that our food system poses every day: monoculture vs. diversity, higher vs. low yielding. But AsoGuabo co-op is working on another option. In partnership with long-time fair trade partners AgroFair and funded in part by fair trade premium funds, they are developing an agroforestry project. On their test plots, they’re using cover crops and intensive brews of microorganisms to tend to the soil. Diverse plantings of cacao and bananas are thriving. Results so far show that yields are up, and spending on weeding, watering, and other infrastructure is trending down. This is the sort of project that more and more studies are showing helps sequester carbon and mitigate the impacts of climate change. While it’s still a pilot project, this agroforestry project looks like a promising path for the future.

The lessons gleaned from this visit to a small-scale farmer banana co-op hold true across fair trade. And, since October is both fair trade month and co-op month, it seems fitting to recap them: 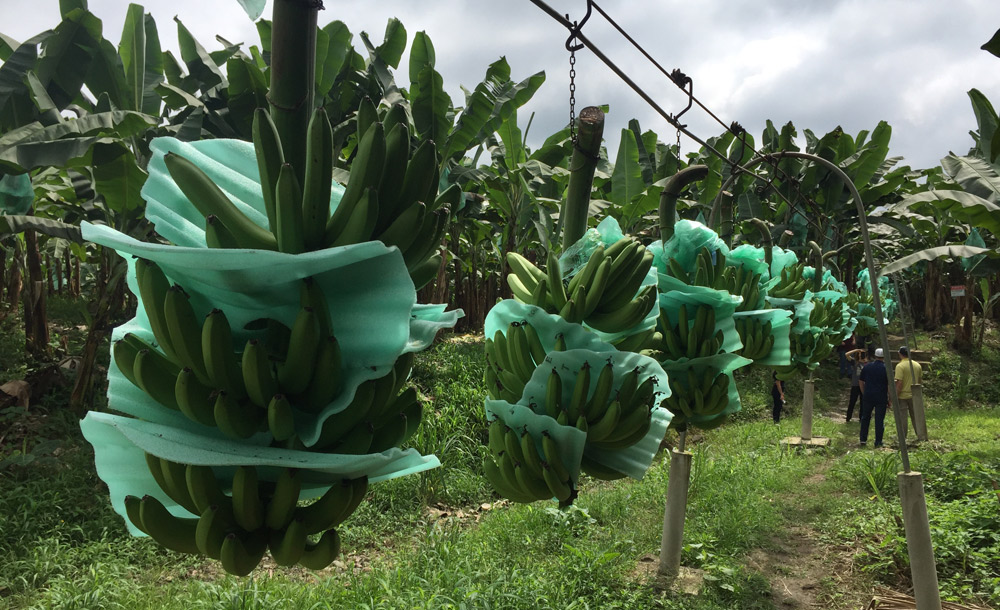 4 thoughts on “Fair Trade Bananas: A Tale of Two Farmers”