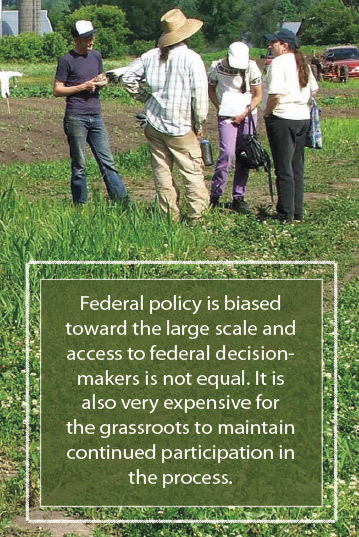 During this period of turbulence and challenges in the Fair Trade movement, it seems appropriate to reflect on the mostly separate but parallel trajectories of fair trade and organic. Fair trade is at the crossroads and organics has been there before. This article hopes to shed some insights from the experience of the organic movement.

Of course, the Fair Trade and Organic movements have much in common. Today, much of fairly traded coffee and chocolates are dual-certified as both fair trade and organic. The Grower Group model that allows small farmers to form cooperatives or democratically–run grower groups and seek group certification, rather than each small farm needing individual certification, has been a huge boon to thousands of small Global South farmers by gaining honest access to both the growing organic and fair trade markets in the North. Both are born from passionate commitment, both these movements share a strong sense that just opposing the wrong is not enough – we must build the sane alternative.

Both trace their recent revival periods to the last century when the excesses of corporate agribusiness-as-usual became all too visible and painful. Both movements have been bottom-up grassroots responses with a lot of sweat equity and minimum mainstream support, until recently. Both movements are dependent on continued strong consumer and stakeholder support and trust.

While both started out with market claims – each had very different goals. Fair trade has pursued the goals of empowering marginalized small farmers in the Global South who have suffered from corporate concentration and unfair trade practices. Organic set out to offer the alternative to destructive pesticide-based agriculture through holistic environmental, social and humane stewardship practices. Both were about meeting an un-tapped consumer demand by doing good.

Both movements required the development and on-going maintenance of marketplace architecture that did not exist – standards -setting, verification mechanisms and transparent and accountable market labeling claims.

However, the two movements have taken very different routes and means to achieve their relative marketplace successes.
The story of the institutionalization of organic through governmental regulations is not meant to imply that fair trade should or even could take this approach. It is simply to state that when organics was at a critical crossroads and could not see how to “self-organize” sufficiently to manage growth and protect consumer confidence – we chose the governmental route.

As market demand grew beyond localized markets, it became clear that organics would need harmonization of standards and third–party verification systems to ensure consumer confidence. In the 1970’s the International Federation of Organic Agriculture Movements (IFOAM) was created to develop community–owned standards for organic and to use stakeholder-driven processes to promote and develop organic worldwide. The idea was to have strong community standards that would push and hold governmental standards accountable. There were participants from different parts of the world but the EU clearly dominated. However, the challenges of managing two-front strategies while staying ahead of consumer demand and creating truly global standards that meet diverse needs of regional organic practices has remained daunting – to say the least.

On this side of the Atlantic during that same period, there were mighty debates about the pros and cons of a “governmental solution” to the problem of how best to institutionalize organic, to build and very importantly to continue to pay for, protect and maintain our standards and market integrity. The central issue was – could we organize ourselves sufficiently and fairly such that we could manage this rapidly growing movement without governmental intervention?

The US movement tried its best to learn from the EU experience of governmental regulations. We eventually chose the governmental route as an inevitable outcome that we should make the best of because we did not have the resources, the structure or the cross-sector unity needed to protect organic integrity as it grew. We set out to create a “public/private partnership” by establishing creative solutions to old school governmental regulations. A national citizen board (the National Organic Standards Board or NOSB) made up of all stakeholders with no one-sector dominating shares statutory powers with the US Department of Agriculture (USDA). The USDA cannot add materials not approved by NOSB but can remove if found to be harmful. The USDA National Organic Program and its accreditation division must be reviewed and recognized by a third party evaluator to ensure their compliance with the organic law. Because of organics contributions to society as a whole, there is some taxpayer support. This still represents one of the most creative, enlightened and fully participatory and transparent regulations in US history – flaws and all.

In retrospect this was probably the most viable way forward for us at the time and more has been gained from governmental support than was lost. Our biggest wins were the messages that the governmental seal is backed up by strong third-party verification systems; including accreditation of certifiers, appeals, enforcement and oversight; and evaluation of accreditors along with the critical public process for setting and maintaining standards. These are key components of the credibility architecture that Fair Trade must now secure for itself.

We were however required to compromise key provisions of the organic platform in this trade-off and this should serve as a valuable lesson for the fair trade movement.

The governmental definition was narrower than the community definition and specifically left out the fairness to farmers and workers, research, promotion and energy-efficiency. What we had hoped would be the “floor” under standards also became for practical purposes the “ceiling” and driving up standards is very slow and difficult and is not pro-active in signaling market directions.

Organic when in the informal sector prior to federal institutionalization was widely understood as a holistic approach that cared about the whole system – the land, plants, animals and the people who care for all of this but, this was just too big a leap for the government to accept and thus we have mostly an environmental claim with the fairness and other aspects now needing to be added back-in through credible marketplace, private and Non-Government Organization (NGO) initiatives.

Governmental understanding of what is organic has been slow and painful.

Federal policy is biased toward the large scale and access to federal decision-makers is not equal. It is also very expensive for the grassroots to maintain continued participation in the process.

Formal organic certification as a value proposition for many small-scale farmers is very limited unless they form cooperatives or grower groups. Many also either do not use formal certification because they: sell direct and qualify under the small scale organic sales exemption rule; simply do not make a formal claim of organic anymore; or seek alternative forms of verification such as – Participatory Guarantee Systems, (PGS), which is not yet recognized fully by all governmental programs.

The recent name change of Transfair USA to Fair Trade USA and its abandonment of the international Fair Labeling Organization system and its relaxing of fair trade practices have resulted in a major split in this vibrant movement. So, as the fair trade movement stands at its crossroads — it must act swiftly to strengthen and protect its core credibility:

Verification and oversight mechanisms must be fully transparent, participatory and reflect the stakeholders and their priorities, as well as consumer expectations;

Accreditation and meaningful stakeholder oversight of the fair trade claim is essential to credibility;

Dispute resolution and appeals must be easily accessible and broadly adopted;

Swiftly build credible partnerships and much more synergy with the organic community to offer multiple and merged claims through mutual inspection;

And finally protecting and defending the rights of the most vulnerable segments of the market must remain paramount.

Ironically, the part left out of organic in the governmental process – the claim of fairness – is now giving organics a very valuable opportunity to add this additional value back to organic through the marketplace and outside of the federal process because of the enduring value of the fair trade claim.

History will judge these two movements not just by the incremental progress made but also by how well we avoided becoming what we set out to be the sane alternative to!