I come from the South Indian state of Kerala. Yes, Vasco da Gama of Portugal landed on our shores – in fact, on the shores of the very town in which I live – over 500 years ago and heralded the advent of colonialism. He came in search of spices, particularly Malabar pepper. But this might be news to you: from the 15th century through most of the 19th century, the Malabar region of India did not actually cultivate pepper. Our predecessors instead collected and gathered pepper. Pepper vines thrived wild in the homestead farms of the Malabar region, along with probably a hundred other crops which had nutritional, therapeutic and nutraceutical values.

A homestead farm in Kerala was a veritable forest farm. It would appear disorganized, not favoring assembly-line economies of scale and production, and not amenable to organized and efficient methods of fertilizing, irrigating and harvesting. The fact is, it was actually a nuanced, evolved and intricately engineered system whose nerve center was the family kitchen. And the matriarch, the woman, for the most part decided what grew on the farms, what was needed for the daily kitchen, what was to be stored for the rainy days, what was to be shared with neighbors, what was to be fed to animals, and what, if anything remained, the men could take to the market and sell. This is what once characterized farming in Kerala, but it is now a thing of the past.

The spoiler: the market!

Actually, the modern market, as we know it today – that which demands quality and quantity not dictated by nutritional needs, environmental balance or the food security of families and communities. And so, suddenly, the power equations within the homestead changed completely. Now, the matriarch has little say in the affairs of the farm. The market dictates, and men mediate with the market. Notions of value and usefulness have changed. Hundreds of trees, shrubs and medicinal plants that once thrived as wild growth are no longer valuable; instead, they have become a hindrance to an orderly, efficient farm that needs to cater to the market. The food basket has changed, too. Wild food has disappeared completely. Tubers have diminished. Fruit trees have dwindled.

Today, Fair Trade Alliance Kerala (FTAK), the small-farmer collective I work for, is involved in an effort to recapture the homestead farming traditions of Kerala. It is a small dream. Our goal is to grow to a collective of about 10,000 small-farmers over the next couple of years. Small-farmers in Kerala have really small holdings, about 3-4 acres on average. So that small dream means about 10,000 farming families stewarding about 40,000 acres of farmland, creating conditions that are akin to a tropical rainforest in crop diversity and biodiversity. 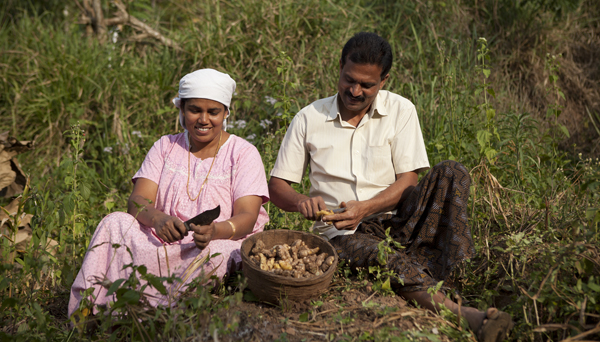 In the process, we are committed to becoming net food suppliers – and by “food” we mean not coffee, pepper or cashews that we grow for distant markets, but “food on the table,” such as rice, fruits, vegetables and tubers for our own local families and communities. And we expect that women will reassert their traditional role and space in the management of the homestead farming economy. Biodiversity for us, therefore, is a food security issue as well as an issue of gender justice.

What role will the market and trade, particularly international commodity trade, play in this scenario that we strive to engender? Undoubtedly, the massive haulage of commodities across continents is unsustainable for a climate-challenged planet. Food miles and the ecological footprint of our consumption can be ignored only at our own peril. But trade is as much a cultural exchange as it is a commodity exchange, and, albeit in reduced volumes, it is here to stay and desirably so. There is thus the inevitable question: what type of trade must prevail when our planet is in peril?

Well, let me give you a glimpse of the beneficial effect the type of international commodity trade that we practice has on the most formidable challenge confronting humanity today. Our farmers reside in the Western Ghats region of India, and the United Nations recently declared it a World Heritage Site. The environmental sensitivity of farming operations here is critical, not just for us but for the whole world, given the climate-challenged times we live in. A significant portion of our farmlands adjoin tropical rainforests. With the stress that human development has brought on the forests, and with the size and productivity of those forests shrinking rapidly, conflicts between man and animal have grown. What if a marauding troupe of wild elephants get to your farm and destroy what might be the result of thirty or forty years of toil? That is exactly what is happening in several of our farming communities, and yet we almost intrinsically know that farmers and wildlife have to coexist for our environmentally secure future.

FTAK was born in the midst of an unprecedented farming crisis in Kerala created by the plummeting prices of agricultural commodities. One of the first investments we made with the social premium funds secured by selling our products under the fair trade regime was in benign solar-powered fences installed between the forest and many of our farmlands. The fences act as a mild deterrent that keeps the animals within the forests.

The cashew industry refers to large cashew nuts as “jumbo nuts.” But the organic and fair trade cashews that Equal Exchange brings to U.S. consumers, sourced from FTAK, could also claim to be “jumbo nuts” – not based on their size, but instead because they are indeed “elephant-friendly” nuts. That bin of organically-grown and fairly-traded cashews that you come across in your local food cooperative is testimony that global commodity trade in a climate-challenged world can in fact chart a fair and sustainable course.

1 thought on “Fair Trade As We Do It: the Story of Jumbo Nuts”