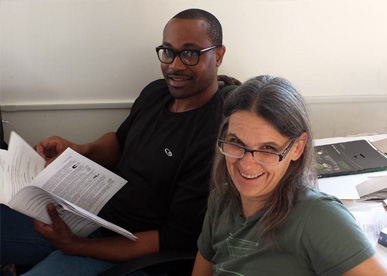 Earning a living wage through gainful employment is crucial to the huge number of Americans struggling to make ends meet, including the 630,000 women and men who will come home from prison this year. A staggering amount of employment challenges await the formerly incarcerated because of their felony convictions. Particularly hard hit are black men, who are more than six times as likely as white men to be incarcerated. And, according to a Princeton study conducted in Milwaukee and New York City, employers are far more likely to offer entry-level jobs to white men with a record over black men who have never been arrested.

Many formerly incarcerated people have no public sector work experience or references, and often lack the computer skills to find jobs that fit their abilities and personalities. Psychological impediments often accompany the stigma of incarceration, along with difficulties in securing housing, clothing, transportation, and childcare. Between 2005 and 2010, 76.6% of our formerly incarcerated citizens were rearrested, many after failing to secure a living-wage job.

While serving my sentence inside the Ray Brook federal prison in upstate New York, I wanted to help address these issues as well as dynamics in the inner city that led me and others to make anti-social choices in the first place. I worked on reentry for more than 10 years and co-founded a Reentry Council. When I learned about Fair Shake, an organization dedicated to supporting the successful reintegration of formerly incarcerated people into society, I was so impressed with their Reentry Packet that I created workshops to engage others in conversation and equip them with tools to better navigate their reentry process. Founder Sue Kastensen brings an “all hands on deck, no excuses” approach to reentry that offers tools, training, and information to prisoners and other stakeholders, including employers and families.

President Obama’s administration has also recently prioritized fairness in the hiring of the formerly incarcerated, encouraging employers to “Take the Fair Chance Business Pledge”: “At its heart, America is a nation of second chances. That’s why the White House is calling on businesses to invest in their communities and eliminate unnecessary hiring barriers for individuals with criminal records.”

Fair-chance employment supports fair opportunities for those who have made mistakes. Employers can support reentry success by removing the box that asks, “Have you ever been convicted of a felony?” from their job applications. This allows applicants to be considered on equal footing before a background check is conducted, and offers an opportunity to discuss their history on their own terms. The Ban the Box initiative does not prevent an employer from conducting a background check; instead it is done either after the interview or when a job offer is presented. To encourage employers to hire the formerly incarcerated, fi 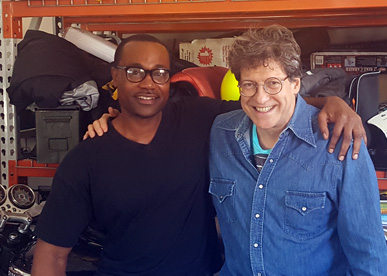 In the fall of 2015, Ray Brook’s Warden collaborated with the Reentry Council and Fair Shake to create a Reentry Summit, scheduled to be held one day after my release. I had invested so much in reentry for so long that I stayed the extra day to participate. There I met David Bronner, CEO of Dr. Bronner’s Magic Soaps, and Marty Sokoloff, owner of Good Groceries. I shared my idea of a “Redefining Cool” program aimed at atrisk youth. The program would enlist formerly incarcerated individuals to counter anti-social messages and models in inner cities with pro-social constructive ones, delivered with style from the perspective of experience.

Sue, David, and Marty collaborated to hire me on at Fair Shake to build out and launch the “Redefining Cool” program. These three change agents saw possibility in me. They decided to address the challenging issues and make informed decisions rather than simply shaking my hand and wishing me good luck. We are all invested in building reentry success.

Each of us can do something today. Can you help to Ban the Box? Will you encourage your employer to include the formerly incarcerated in anti-discrimination policies? It’s time for each of us to see the role we play in fixing our broken system. It’s not only the formerly incarcerated individual whose life is at stake here; the outcome will affect us all. Everyone deserves a fair chance.

To find out how you can engage, visit: fairshake.net/getinvolvednow.