Written by Elizabeth A. Bennett

“We trimmed [cannabis] for three months without receiving pay. We were supposed to get paid at the end of every month. In November, it became really difficult for us because we were sleeping outside in tents, and it got cold. We were not sleeping well — our well-being was not cared for — and trimming is really hard on your body. [The farm owners] didn’t respect my relationship. My girlfriend and I had been together for six years, but they told us we were lying and putting on a show. They were always flirting with us … and stuff. I never want to see those guys again.”

For decades, workers have flocked to Northern California and Southern Oregon to help with the fall cannabis harvest. Some are migrants who include the crop on their seasonal tour. Others are driven by an interest in cannabis culture, or by the promise of lucrative pay for low-skilled work.1 While some cannabis workers (or “trimmers”) have had pleasant, safe and profitable experiences, many, as described above, have not.

Although cannabis is illegal federally in the United States, individual states are increasingly exercising their authority to permit production, sale and use. Since 1996, when Californians voted to legalize medicinal marijuana, the sector has operated in both legal and black markets. Today, consumers can legally purchase recreational cannabis in Alaska, Colorado, Washington and Oregon, and several more states (California, Maine, Massachusetts and Nevada) have voted to legalize it and will permit sales soon. Yet, because only 20% of Americans live in states where recreational cannabis is currently legal, and some consumers prefer the lower prices of illegal cannabis, underground production persists.

Working on illegal cannabis farms (or indoor cannabis grows) puts workers at an especially great risk of abuse. Workers can be reticent to report abuse, and employers are motivated to ensure they do not. As a result, cannabis trimmers report pervasive wage theft, sexual harassment and assault, discrimination, unsafe housing and exploitative working conditions. Farm owners use threats and acts of violence to improve productivity, silence dissent and even hold workers hostage.

Does buying cannabis on the legal market ensure that workers were fairly treated?

No. Many labor protection laws have exemptions for farmworkers, and, as a result, they are among the most vulnerable workers in the American economy. On average, farmworkers earn about half of the living wage for agricultural areas, and about 20,000 U.S. farmworkers experience acute pesticide poisoning each year.2 Even legal crops are at times produced through labor exploitation.

With cannabis, the distinction between legal and illicit production is not always clear. For example, some producers may send better-quality product to the legal market, and lower-quality product to the black market. Trimmers may not be sure what they are getting into, as some typical “red flags,” such as paying workers in cash, are common. As one trimmer explained:

“I got pulled into being manager at an indoor grow [for the legal market]. The owner had a big cocaine problem and was going through a divorce. He was really unstable and didn’t get the license [to grow legally]. It was a disaster … one time, I got a chemical burn [from acid used to adjust the pH of water that was not stored properly]. He didn’t even care … he just made it a rule that we had to have shoes on — which of course I was doing! Now I have deep purple scars on my feet.”

Can consumers “vote with their dollars” by purchasing fair-labeled cannabis?

Not quite yet. I checked with six fair labor labels, sustainability seals and food justice initiatives operating in the United States.3 Most have not received queries from cannabis producers or consumers, and none currently have plans to expand into the cannabis sector. 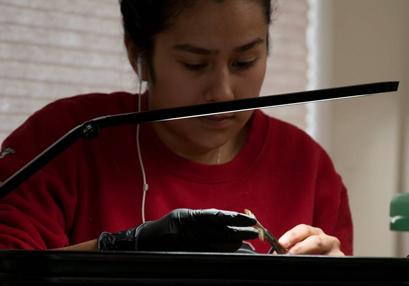 Equitable Food Initiative (EFI), a newly formed NGO focused on fresh produce, stated that it is currently working to scale efforts within the fresh produce sector, and it would not expand to other segments of agriculture until it verifies that the label is having the desired impacts in produce. Sustainable Agriculture Network/Rainforest Alliance (SAN/RA) explained that, although their sustainability standards could be applied to the legal production of cannabis, and that a farm could be audited against those standards, they would not permit a cannabis farm to use their trademarked seal. This reflects a more general policy that prohibits use of their seal on cigarettes and coca leaves (although the production of tobacco could be audited). While each organization agreed that it is important to support agricultural workers in all sectors, none felt positioned to spearhead the effort. Although several cannabis-specific certification programs have emerged, none have adopted empowering labor standards or producer-inclusive standards-setting processes. The focus seems to be more on environmental impacts. The Cannabis Conservancy (TCC), for example, aims to eliminate harmful chemical inputs, reduce waste, improve energy efficiency and conserve water. Likewise, the Foundation of Cannabis Unified Standards (FOCUS) centers on public health, consumer safety and the environment. While TCC and FOCUS standards include typical international labor provisions, such as paying the minimum wage, neither raises the bar for farmworkers’ rights.

One label that does go further toward protecting workers is Clean Green. The most well-known label on the market, Clean Green also originated as an environmental initiative, but has since included some labor protections, such as the option for gender-separate sleeping and bathing quarters (which aim to reduce instances of sexual assault). Unfortunately, however, Clean Green’s governance structure and standards-setting process have not been inclusive of producers nor transparent to the public, two core features of a voluntary certification system.

The future of fair cannabis?

There is a demand for ethically sourced cannabis. In Portland, Oregon, 28% of dispensaries report that customers frequently request “organic or socially responsible” marijuana, and another 53% say they experience this request occasionally. Knowing that legalization is not sufficient for ensuring workers’ rights, that existing certifiers are not stepping up, and that new cannabis certification programs are more focused on the environment, a group of Portland-based grassroots organizers are in the early stages of developing a multi-stakeholder standards-setting organization for the legal cannabis industry.

The Ethical Cannabis Alliance (ECA) aims to draw on lessons from existing domestic programs, such as Food Justice Certified and the Fair Food Program, as well as the fair trade movement in general, to develop a transparent, multi-stakeholder, third-party certification system. Will the ECA succeed in creating and promoting standards that improve conditions for cannabis workers? I hope so!