Straddling the borders of Uganda and Kenya, massive Mount Elgon towers above the hot African plains, providing cool shelter to a rich diversity of plant and animal life. Its forested slopes provide a perfect climate for growing coffee, and for generations the Bagisu tribespeople have cultivated Robusta and Arabica beans there. 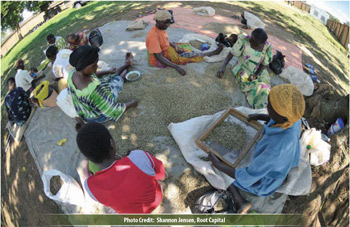 Though prosperous today, a lack of working capital in its early years constrained Gumutindo’s ability to thrive. Gumutindo could secure contracts with Fair Trade buyers, but it didn’t have enough cash to buy the large volumes of beans from its members that the buyers required, nor the financing to pay for the beans’ processing and export. Gumutindo’s members are small-scale, subsistence coffee farmers who couldn’t wait for the buyers to pay the cooperative to receive their share. Gumutindo therefore could not fill the international buyers’ orders and many of its members sold their beans locally.

“Most small-scale farmers live hand to mouth,” explains Jonathan Rosenthal, founder of Equal Exchange. “They need the cash, and if a cooperative can’t pay for their harvest in a timely manner, they’re going to sell it at a much worse price to a local buyer.”

In 2005, Gumutindo approached Root Capital, a nonprofit social investment fund, seeking financing. With Root Capital’s credit, the cooperative was able to expand its reach and market share from $473,000 in revenues in 2004 to over $3 million in 2011. Payments to individual coffee producers more than doubled, and the number of farmers supplying Gumutindo rose from 2,500 to 6,750.

Like Gumutindo, Fair Trade cooperatives around the world have difficulty accessing credit from commercial lenders, which hinders their ability to grow and provide sustainable livelihoods to their members. Most commercial banks won’t lend to rural businesses, and if they do, they demand payment schedules and hard collateral that cash-poor enterprises struggle to provide.

Root Capital formed in 1999 to help small and growing agricultural businesses like Gumutindo gain access to credit. Trapped in the “missing middle,” or the gap between microfinance and commercial banks, these enterprises require loans from $25,000 to $2 million, which are too large for microfinance, but too small and remote for commercial lenders.

Our clients serve as economic engines of rural communities in the developing world, paying higher and more stable prices to small-scale farmers than they could otherwise obtain. This in turn strengthens local communities and empowers farmers to adopt environmentally sustainable practices, such as soil and water conservation, that are critical to long-term prosperity.

Gumutindo’s success, for example, ripples across the coffee growing communities. At one primary cooperative, farmers launched a savings and credit union through which women infected with HIV/AIDS save 500 shillings each week (about 50 cents) to feed their families if staple food crops fail. They contribute another 500 shillings to an endowment fund for their farmer cooperative’s elementary school.

When it comes to Fair Trade, Root Capital is generally the last mile solution. That is, cooperatives typically seek financing from Root Capital after they’ve already obtained certification but, like Gumutindo, are unable to take full advantage of their certification.

Kpeya Agricultural Enterprises, a cocoa cooperative in Sierra Leone, is another example. Though it was the first cocoa cooperative to obtain Fair Trade certification in that country, a lack of credit forced it to sell to local buyers for two years, at $200 less per ton. Root Capital’s $30,000 loan will now enable Kpeya to fill orders from Fair Trade buyers.

Root Capital is funded by debt investments and philanthropy. One hundred percent of the loans we accept are placed with borrowers in Latin America and Africa. Donations strengthen our balance sheet and underwrite our financial advisory services and other costs. Because we seek to catalyze a larger financial market serving rural enterprises, we lend at commercial rates. Charging lower rates would distort local markets and fail to attract other lenders, undermining Root Capital’s mission to evolve a viable long term lending model.

Our model has proven so successful that commercial lenders are crowding into the market in Peru, the country where we’ve operated the longest. Like Root Capital, they are providing the credit that’s needed to help Fair Trade cooperatives and other social enterprises flourish and grow.