Esperanza Dionisio Castillo has been the General Manager at the Pangoa Coffee Cooperative in Peru for over 20 years. From farming to roasting, the coffee industry is often a male-dominated space, but today that is changing. In her interview with Julia Gentner of Grow Ahead, Dionisio Castillo shares her experience as a woman in leadership within Peru’s coffee industry.

Twenty years ago, you became the first woman in Peru to be a General Manager at a coffee cooperative. This isn’t very common in the coffee industry overall, even today. Can you tell us what this experience has been like for you?

I have had many opportunities to access positions that are traditionally only available to men. First of which was when I went to university and there were only 13 women and 150 men.

When I finished school, I went to work at the Satipo Coffee Cooperative. It was a challenge because one of the male agricultural engineers was not doing his job well and the cooperative was unhappy. The administrative board said, “well if a man can’t do the job maybe a woman can.” It was posed as a challenge.

When I started, they did not have anything, just a motorcycle to go to the countryside. So, I organized with the Educational Committee (at the cooperative, all the support for technicians comes from the Educational Committee), solidified the schedule of farm visits, and maintained a nursery of citrus to help with coffee income diversification. This was during the time of the first attack of the coffee leaf fungus, “la roya.”

When the Satipo Cooperative splintered off to begin the Pangoa Cooperative, the board of directors said that I could join them and help with the modernization of coffee growing. I said “Great, I’ll come!” But it was a fight with the farmers because they said, “Who is this girl that doesn’t know anything, what can she teach me after this many years working in the field?” I had to explain that while they had the experience, I had the knowledge and if they let me help them, they could produce even more. I did the most convincing over meals and in the kitchen: talking about politics or, when they were sick, helping to make medicine for them to take and really building the trust between us. Once I had their trust, then I could do the work of teaching them how they could produce more coffee.

I later left the cooperative to open my own office for specialized agricultural and technical advice. This was until 1987 when the Shining Path, a really strong political movement, arrived. I had to close my office because the farmers came to me and told me that they were dying — that the police were killing them and the Shining Path was killing them.

In 1996, the Pangoa Cooperative called me about the management position. At this time, they were having a lot of problems. They had lost nearly 2,000 pounds of coffee from the humidity since they had done a bad job of storing it and lost a lot of money. I agreed to take the position and stay for a year — now it’s been 20! After ten years, we were able to pay off all the debts, and later we were able to develop and invest in organic agriculture and fair trade.

In 2008, we started to expand our work with organic fertilizers, compost, and micro-organisms. We went to a farmer-to-farmer training at the COMSA Cooperative to see their biodynamic farms, and now we are working with our nearly 700 cooperative members to spread that knowledge.

Can you tell us about some of the changes you’ve witnessed at the Pangoa Cooperative in the past 20 years, and how you’ve weathered the challenges?

When we started, we were selling conventional coffee and we had to be very careful with handling money — every dollar of income we had to use to our advantage. Fair trade premiums have helped our cooperative weather the ups and downs, but even fair trade depends on the market. When the market price of coffee increases, so does the fair trade price. And when the prices fall, fair trade roasters still pay the fair trade minimum price. I really do admire the fair trade roasters. They are our greatest allies and through them, there is an entire group of consumers that believe in this movement. This [support] is the most important because it means we won’t have to stop producing coffee. In earlier years when I didn’t know about fair trade and there were hard times, farmers would simply come to us and say, “the price is so low, we can’t put up with it anymore” and throw away their coffee. This was because we did not have the protection of fair trade and in reality, producing coffee without it is not sustainable.

Can you tell us about Pangoa’s Women’s Committee? What are they currently focused on and how does their work impact the community more broadly? 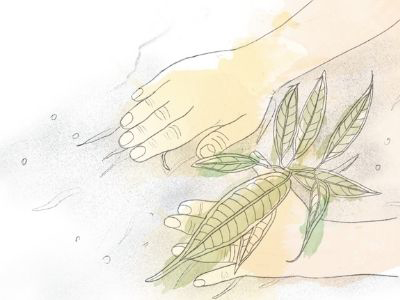 The Women’s Committee formed in 1997. The topics we were focused on then revolved around capacity building for self-esteem and how to take control over your situation as a mother, to support yourself and your family. Another goal of the committee was to have opportunities for the women to have their own income separate from coffee. We worked on activities like planting vegetable gardens, raising guinea pigs and chickens, and the creation of a market for the women to bring their own products and food to sell. Currently, the Women’s Committee is also working on a reforestation project with Grow Ahead.

Today, there are many examples of women who are leaders and have taken on positions of authority in their communities. They have become municipal officers and taken on roles in schools because they know how to read and write and can share knowledge in leadership roles.

What kind of role does the Pangoa Cooperative play in the community?

A very important role. There was an idea to close the cooperative in 2001 because our organic certification was [temporarily] taken away. We had lost $20,000 dollars because we had already paid the farmers the higher organic price but couldn’t sell the coffee as organic. The farmers came to the general assembly and said if the cooperative can’t sell their coffee, then the cooperative didn’t make sense anymore and that selling to the coyote (middlemen) would be better. But there was a tremendous message from the members that said, no, impossible. If we close the cooperative the coyotes are going to be abusive and take advantage of the farmers because it is the cooperative that regulates the prices. We at the cooperative can come and say how the finances are, how the market price is, inform the farmers with trust and transparency. They can’t go to a coyote and demand information and transparency. So, it is a really important role – we are the protectors of the prices of coffee, cocoa, and honey.

In our stores and our cafés in the village, we are promoting the consumption of our own coffee with the youth in the community. This is a huge public objective so that the younger generation can try more coffee, get to know quality coffee, and become local consumers of their families’ own products. Their parents are coffee growers and they need to know the value in their community’s own products.

Are there any final thoughts that you would like to share with our readers and with coffee drinkers?

Yes, with the consumers, especially those who buy fair trade coffee and chocolate: I hope that they can read more stories from producer cooperatives so they can know what we are doing in our towns and villages and that they will support us by seeking out fair trade products.

Grow Ahead is a non-profit that connects people directly to small-scale farmer organizations to support farmer-led reforestation projects that benefit people and the planet. To learn more and support community led initiatives, visit GrowAhead.org

Community as Capital: How One Worker Center is Sowing the Seeds of Justice.   In Massachusetts, workers are coming together to build economic justice and food sovereignty for their communities.

Keeping the Sacred, Sacred: Indigenous Peyote Conservation.   Hear from the Native-led initiative that is protecting peyote cultivation from cultural and ecological erasure.

What’s Fair? A New Guide to Fair Trade Labels.   “What’s the difference between all these fair trade labels?” It’s a common question. A new resource it here to help.

When a Tree Isn’t Just a Tree.   Trees create shade, sequester carbon, and so much more. But not all tree planting projects have an equal impact.

Why Regenerative Agriculture?   Farming can be a source of greenhouse gas emissions—or a tool to sequester them. This infographic explains how.

Product Picks - Issue 20.   Check out some of our staff’s favorite products brought to life by community-driven, grassroots efforts.