A Tribute to the Work of Berta Cáceres, Indigenous Rights Leader

Berta Cáceres was murdered in her home on March 3, 2016 in the community of La Esperanza, Honduras. Berta cofounded the Civic Council of Popular and Indigenous Organizations of Honduras (COPINH) in 1993, a grassroots organization that struggled for indigenous rights and the environment. Berta had dedicated her life to human rights and environmental justice, and was awarded the prestigious Goldman Environmental Prize in 2015 for her work.

I first met Berta Cáceres in the early 2000s while working in Chiapas, Mexico. I was fortunate to work with many organizations in the region, including COPINH. After decades of military dictatorships, the lost decade of the 1980s and six years into the Zapatista rebellion in Chiapas, frontline communities and activists were deepening their analysis and strategy. Emerging at the time was a growing recognition of the shared experiences and challenges in Southern Mexico and Central America: extractive industries like mining, damming of rivers, privatization of natural resources, biopiracy, and land grabbing. Rural communities were especially vulnerable after enduring the onset of so-called free trade agreements including the North American Free Trade Agreement (NAFTA) and the Central American Free Trade Agreement (CAFTA). Spearheaded by Gustavo Castro and others, local organizations embarked on a new era of cross-border alliances and joint campaigns, linking frontline organizations and struggles throughout Mesoamerica.

Gustavo Castro, director for Friends of the Earth Mexico-Otros Mundos Chiapas, was with Berta the night of her assassination in Honduras. He was injured in the attack and the lone witness to Berta’s murder. The Honduran government prevented Gustavo from leaving for close to a month, while his lawyer was illegally suspended and under constant threat. Gustavo was finally permitted to return home on March 30th, but only after massive pressure on the Honduran government by international human rights organizations.

Latin America has a long history of human rights violations and ecological destruction, often masked as development. For years, the World Bank and the Inter-American Development Bank have funded mega projects like dams as a means of bolstering unaccountable governments and saddling countries with huge external debts. From the 369 Mayans killed in 1983 by the Guatemalan Army for opposing the Chixoy Dam on the Rio Negro, to the $15 billion Yacyretá Dam boondoggle, dubbed “a monument to corruption” by former Argentinian President Carlos Menem, which has displaced thousands of Argentinians and will displace thousands more if ever completed. Displacement often comes without proper consultation and compensation, while having disastrous environmental impacts. The sad irony is that most displaced and impacted communities rarely access the electricity or irrigation created by the dams. These mega projects simply reinforce the inequity and injustice in these communities.

Local organizations and activists have not stood idly by in the face of ever-expanding threats to their livelihoods and communities by extractive industries and corporate agriculture. These organizations have a rich history of not only opposing destructive and unaccountable intrusions, but also developing people-centered alternatives. This opposition, however, has led to massive persecution. Latin America, has a long legacy – stretching back to before the dark years of military dictatorships – of persecuting human rights defenders, community organizers, and peasants. Honduras is known for being one of the world’s most dangerous countries, and ranks high in murders of environmentalists with (according to Global Witness) 109 killed between 2010 and 2015. This phenomenon is not limited to Honduras, however; it is a global crisis. According to Autonomous University of Barcelona’s Institute for Science, Technology and the Environment’s “Global Atlas of Environmental Justice,” there were more than 1,750 environmental conflicts globally last year alone.

At the heart of Berta and COPINH’s struggle was Agua Zarca Dam, a series of dams on the Gualcarque River managed by the Honduran corporation, Desarrollos Energéticos S.A., or DESA. The Gualcarque River is lifeblood of Honduras’ Indigenous Lenca people and damming it would cut off their water and destroy their livelihoods.

Early on, Berta and COPINH filed federal complaints against the project, bringing their case to the Inter-American Human Rights Commission, as well as the World Bank’s International Finance Corporation (IFC), which was funding the project. Despite massive opposition from the Lenca, Honduran environmentalists, and the international community, the Honduran government and DESA pushed the project forward. With no recourse left, COPINH organized a blockade to stop the dam’s construction, an effort that was immediately met with violent reprisals from DESA, private paramilitaries, and the Honduran Army. Community leaders were murdered, COPINH members were beaten, and Berta began receiving more death threats, all with impunity and government complicity. Still, COPINH’s efforts have achieved some success, with Agua Zarca’s future in jeopardy as the IFC and Chinese investor, Sinohydro, have pulled out of the project. 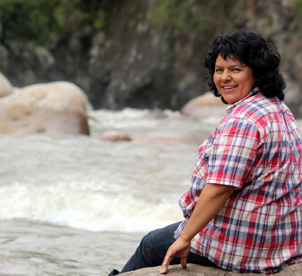 Berta’s struggle is set against the backdrop of accelerating efforts to exploit global strategic resources and U.S. foreign policy. In 2009, left-leaning President Manuel Zelaya was removed from power in a coup d’etat supported by the United States. Zelaya represented the latest trend in Latin America toward more populist governments seeking to develop a path independent of U.S. intervention. Under Zelaya’s replacement, Porfirio Lobo, community-displacing mega projects like Agua Zarca accelerated, as did the persecution.

The United States has a long and disgraceful legacy of intervening in Latin American politics, from the early years of gunboat diplomacy and Operation Condor, to economic intervention in the 2000s to counter the “Pink Tide.” In the aftermath of the coup, then Secretary Hillary Clinton pressured allies in the region to deter Zelaya’s return to the presidency, claiming in her memoir, “We strategized on a plan to restore order in Honduras and ensure that free and fair elections could be held quickly and legitimately, which would render the question of Zelaya moot.” “Restoring order” via elections translates into backing presidential and congressional candidates sympathetic to the United States.

Honduras reflects the extraordinary challenges facing frontline communities, and especially indigenous people, around the globe. Victoria Tauli-Corpuz, United Nations Special Rapporteur on the rights of Indigenous Peoples, remarked, “You cannot delink the fight of indigenous people for their lands, territories and resources from the violence that’s committed against indigenous women (and men), especially if this is a violence that is perpetrated by state authorities or by corporate security.”

To date, little progress has been made to hold Berta’s murderers accountable. Four individuals have been arrested in connection with her murder, but the Honduran government has refused to accept the Inter-American Commission on Human Rights’ involvement in the case, and popular sentiment is that these individuals will take the fall for the establishment.

In the months after Berta’s death, the struggle of frontline communities facing mega extractive industries, and the persecution of environmental rights defenders, have made global headlines. Despite increased oppression, activists in Honduras and abroad have dug in, continuing to campaign for democratic and people-centered development.

Berta was fond of saying “They are afraid of us because we are not afraid of them.” She leaves behind a legacy, organization, and family defined by absolute commitment to defending human rights.

May we have the courage to follow her lead.

3 thoughts on ““Berta Did Not Die. She Multiplied.””