Fairness, transparency, commitment to small-scale producers: those are just a few of the central fair trade values. They are also the exact opposite of the practices of the multi-billion-dollar college cafeteria industry. That’s the takeaway from a new report that exposes the secretive contracts and lucrative kickbacks that link those cafeteria companies to some of the world’s largest food and beverage companies like Tyson, Cargill, and JBS.  The report, Be-Trayed: How Kickbacks in the Cafeteria Industry Harm Our Communities – and What to Do About It, brings together original research, identifying the size and scope of the problem, as well as recommendations for action for students, school administrators, farmers and ranchers, and food workers, as well as shareholders and public officials.

One concrete step: Support the Real Meals Campaign, calling on Aramark, Sodexo, and Compass Group, to adopt our roadmap for real change in their sourcing, putting close to $1 billion each year into food that is fair, humane, climate-friendly, and grounded in racial justice. 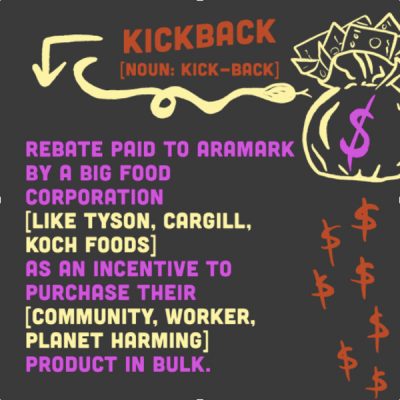 If you’ve ever eaten at a college cafeteria, in baseball stadium, a convention center, a museum, or a hospital, you’ve probably been served a meal by Aramark, Sodexo, or Compass Group (whose subsidiaries include Chartwells and Bon Appetit). These “Big Three” of the food service management industry are some of the biggest companies most people have never heard of. They prepare most of the meals you eat away from home, but not in a place you’d think of as an actual restaurant. And they have the college cafeteria business on lockdown, controlling 83% of the revenue in that sector.[i] Their revenue rivals or exceeds that of McDonalds.

These massive companies have a big role in shaping how our food system works. And right now, they are using that power to prop up some of the biggest food companies in the world whose names are linked to workers’ rights abuses, deforestation, climate change, and human rights violations.

It can be easy to think about this connection between all these Big Food companies and companies like Aramark as a simple problem of supply and demand, perhaps that mythical “invisible hand” of the market guiding similarly large companies together. However, the Be-Trayed report contradicts that narrative. It is not just convenience, but an intricate system that locks these companies into exclusive deals with Big Food corporations. The more they buy, the more they get back in the form of kickbacks. Volume discounts are not a novel idea. But the purchasing system outlined here does not focus on saving money for university clients or student eaters. Its complex matrix of punishments and incentives is all aimed at funneling more profits back to the corporate bottom line.

The Be-Trayed report breaks down the kickbacks system into the four features that prop it up:

Food Service Management companies have been sued over these practices before. Testimony from one of the former New York State Assistant Attorney General who prosecuted one such case described kickbacks as “fundamentally bad business.” He went on to explain that “In my opinion, rebates create an inherent conflict of interest. Decision makers are more likely to make food choices based on maximizing rebate income rather than other important factors.” 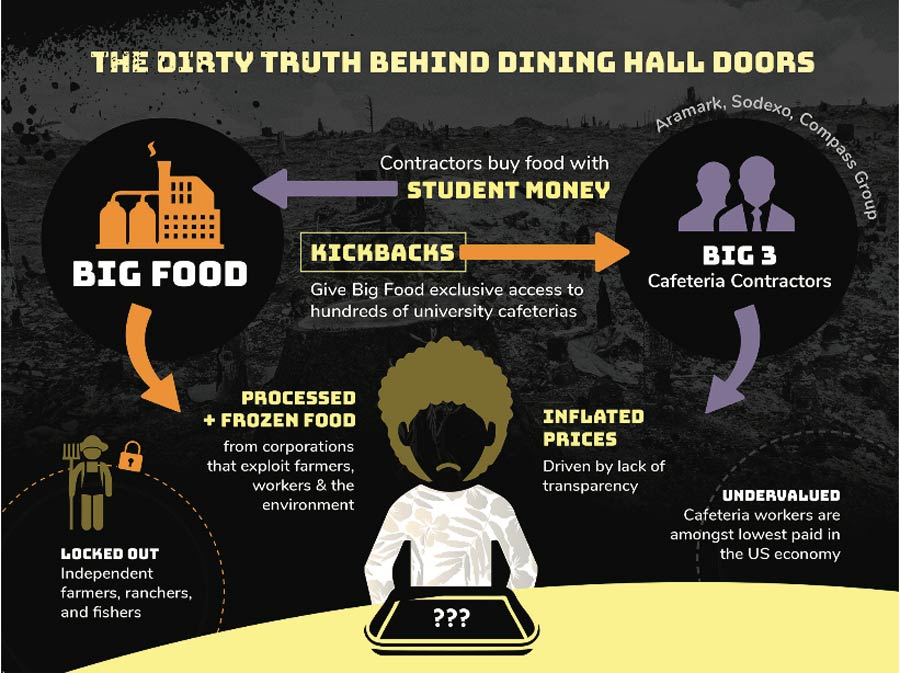 Big Food: Bad for People and the Planet

While Aramark, Sodexo, and Compass Group may not be household names, the Big Food companies they work with are. Indeed, some of the biggest have been in the headlines recently. Smithfield Foods, where a workers’ group has sued over lack of protections as COVID-19 swept through pig processing plants. Tyson, whose chicken processing plants have a long history of mistreating workers, from degrading accounts of line speeds so fast workers are unable to take bathroom breaks to dangerous conditions in the current pandemic. JBS, a massive meat multinational selling under Pilgrim’s Pride and other brands, whose Brazilian operations are linked to the fires that spread through the Amazon rainforest last year.  Cargill, the commodity trader whose name never appears on household products, but whose supply chains funnel cocoa, soy, and palm oil into industrial food chains. And leave child labor, deforestation, and poverty in the communities where they work from Indonesia to Brazil to Cote d’Ivoire.

Dubbed “the Worst Company in the World” in 2019, Cargill has recently been back in headlines for increasing child labor in their cocoa supply chains.

These Big Food companies are notorious for their contributions to human rights violations, workers’ rights abuses, and the climate crisis. And these are the companies who prop up the kickbacks model. It’s a model with just a few winners, executives and shareholders who profit, and a whole lot of losers—all of us who want good food, decent jobs, and a habitable planet.

The Be-Trayed report delves deep into the details of how kickbacks cost university clients, vendors, and students money—and looks beyond the nitty-gritty line items. The report concludes: “The impacts of an increasingly privatized and kickback-driven supply chain may be invisibilized, but they are severe for so many communities, from Indigenous peoples of the Amazon to Black farmers in North Carolina, from processing plant workers in Arkansas to cattle ranchers in Colorado, from students in the food line to cafeteria workers on the frontline.”

But it does not have to be this way. While corporate kickbacks lock in supply chains of destruction, those student meal plan dollars could be investing in another food system entirely.

That’s why we’re part of the coalition calling on Aramark, Sodexo, and Compass Group for #RealMealsNow.

That roadmap for real change includes:

These steps add up to a goal of investing close to $1 billion per year to work for our communities.

While it sounds like a big number, Real Food Generation, the authors of the report, have been working on university campuses for years. The success stories scattered throughout the report show what’s possible. One example tells of students at the University of Vermont dumping Dole and Chiquita’s bananas and human rights abuse records to support small-scale farmer-grown bananas from Equal Exchange. Let’s build more of that.

The COVID-19 pandemic has laid bare the ways that the current industrial food system is failing eaters, workers, and farmers alike. As more people look for ways to make change, here are a few things you can do today:

[i] Aramark, Sodexo, and Compass Group control 83% of all revenue earned by the top 50 contracted food service companies in the U.S. in 2015, according to the Be-Trayed report.