January 1, 2019, marked a quarter-century since the Zapatistas captured the world’s imagination with their brief but audacious uprising to demand justice and democracy for indigenous peasants in southern Mexico. Since its 1994 uprising, the Ejército Zapatista de Liberación Nacional (Zapatista Army of National Liberation, EZLN) has become better known for its peaceful mobilizations, dialogue with civil society, and structures of political, economic, and cultural autonomy. Named after Emiliano Zapata, a hero of the Mexican Revolution, the Zapatistas took up his rallying cry of tierra y libertad (land and freedom).

With the Cold War drawing to a close and pundits declaring the definitive triumph of free market capitalism, the EZLN played an important role in providing an example of what a new wave of popular movements might look like. With some historical perspective, it is even clearer what a critical contribution that was—the Zapatista movement has influenced grassroots activists and social movements like few others of the late 20th century.

The legacy of colonialism—centuries of racism and exploitation—was the historical backdrop of the Zapatista uprising. Chiapas, Mexico’s southernmost state, is rich in natural resources but one of the poorest states in Mexico. It has one of the country’s largest indigenous populations, and some of the highest rates of malnutrition, maternal mortality, and illiteracy. Chiapas also has a long history of conflict over unequal land distribution. After peaceful movements for land reform in the 1960s and ‘70s were met with government indifference and increased repression, many indigenous villagers concluded that armed struggle was the only path left to them. In November 1983, the EZLN was founded as a small guerrilla cell.

After ten years of clandestine organizing, the Zapatistas decided they would rather risk dying from a bullet than continue watching their children die from preventable diseases. They chose a symbolic date for their uprising: Jan. 1, 1994, the day the North American Free Trade Agreement (NAFTA) went into effect. The EZLN was one of the first popular movements to recognize neoliberalism as a dangerous new stage of global capitalism, calling NAFTA a death sentence for the indigenous peasants of Mexico.

As dawn broke on New Year’s Day, Zapatista troops occupied seven towns throughout eastern Chiapas, including San Cristóbal de las Casas, a quaint colonial city nestled in the misty highlands of Chiapas and a major tourist destination. The Zapatistas read their declaration of war from the balcony of San Cristóbal’s municipal palace but slipped away in time to escape the full brunt of the Mexican military. The uprising lasted less than two weeks, but transformed the EZLN into one of the most well-known social movements in the world, and one that would inspire an extraordinary level of solidarity.

In 1996, the EZLN and the Mexican government signed the San Andrés Peace Accords on Indigenous Rights and Culture. The Mexican government, however, never implemented the San Andrés Accords. In 2001, the Mexican Congress passed the Indigenous Law instead – a watered down version of the San Andrés Accords that the EZLN rejected out of hand. The center-left Partido de la Revolución Democrática (Party of the Democratic Revolution, PRD) voted for the law, which the EZLN considered a deep betrayal. Current Mexican President Andrés Manuel López Obrador, known as AMLO, was mayor of Mexico City at the time and a key leader of the PRD. The Zapatistas have been critical of AMLO ever since, and this conflict could shape their relationship with Mexico’s first left-leaning president in decades. AMLO has recently proposed incorporating the San Andrés Accords into the Mexican Constitution, indicating his interest in reestablishing trust with the Zapatistas. The Zapatistas, however, have long argued that, under neoliberalism, the capitalist class is always in control, regardless of which political party is in power.

Although never implemented, the San Andrés Accords created a framework that the Zapatistas have implemented on their own. After the passage of the Indigenous Law in 2001, the ELZN turned away from any further engagement with the Mexican government and has concentrated on the construction of indigenous autonomy within its own territory.

The Zapatista structures of indigenous autonomy have extended access to rudimentary health care and education to rural villages in Chiapas. The Zapatistas exercise self-determination through local and regional autonomous governments. Economic cooperatives invest resources back into their communities, developing an economy based on collective effort and community wellbeing, rather than competition and profit.

Over the past 25 years, the Zapatista movement has had a significant impact locally, nationally, and internationally. In Zapatista territory, in addition to its project of indigenous autonomy, the EZLN carried out a series of land takeovers, occupying large ranches and redistributing the land to peasants. This distribution of wealth continues to shape living conditions for Zapatista villages farming on reclaimed land today.

For many people throughout Mexico, the Zapatistas represented the voice of the voiceless. By empowering civil society and challenging the status quo, the EZLN arguably contributed to ending decades of one-party rule in Mexico when the Partido Revolucionario Institucional (Institutional Revolutionary Party, PRI) lost the presidential elections in 2000.

Since 1994, the EZLN has also engaged in dialogue with international civil society, inspiring a generation of young activists to organize for social justice in their own contexts. The First Intercontinental Gathering for Humanity and Against Neoliberalism in 1996, and other international gatherings organized by the EZLN, helped jumpstart a worldwide anti-globalization movement.

People around the world have been inspired by images of Zapatista women: Major Ana María wearing a black ski mask and brown uniform, leading indigenous troops during the uprising; Comandanta Ramona standing next to Subcomandante Marcos during peace negotiations with the Mexican government, the top of her head barely reaching his shoulder; Comandanta Ester, draped in a white shawl with embroidered flowers, addressing the Mexican Congress to demand respect for indigenous rights and culture. The dignity with which these women carried themselves embodies what the Zapatista movement has come to represent—the resistance of the marginalized and the forgotten against the powerful.

When the EZLN began organizing in rural Chiapas, women there were experiencing an extraordinary level of violence and discrimination. Women were often married against their will, and commonly had a dozen children or more. Domestic violence was generally considered normal and acceptable, and a woman could not leave the house without her husband or father’s permission. Women’s confinement to the private sphere translated into very limited participation in public life.

But gender roles were radically redefined in the context of the Zapatista movement, as women became guerrilla insurgents and political leaders, healers and educators, and members of economic cooperatives. A handful of Zapatista women in key roles of leadership, combined with a broad push from women in the Zapatista base, succeeded in passing the Women’s Revolutionary Law and achieving some remarkable transformations in institutions, behaviors, and expectations around women’s rights. Women’s organizing also led to the banning of alcohol in Zapatista territory, which women credit with a significant reduction in domestic violence.

At a regional women’s gathering in the Zapatista community of Morelia, a group of Zapatista women described the process this way: “Thanks to our organization [the EZLN], we have opened our eyes and opened our hearts. (…) We joined the struggle and that’s when things started to change and we stopped being oppressed. (…) In community and regional assemblies we participate side by side with the men. We have the right to hold any position within our organization. We also have the right to leave the house, to dance, to sing, to play sports, to go to a community party. Today there is hope and freedom in our lives.”

The Zapatista Movement Inspires a Shared Vision for a Just Society

Although the EZLN does not occupy the place it once did in the popular imagination, the Zapatista movement continues to offer lessons to social justice advocates and activists that might be more relevant than ever. In 1994, the Zapatistas had the chutzpah to declare war on the Mexican government, and to take on global capitalism and patriarchy; but they had the humility to know that none of us have all the answers, that we make the road by walking. The Zapatista movement also continues to offer a viable example of local alternatives to global capitalism, albeit on a small scale.

In a moment of heightened polarization in the United States and around the world, it is worth looking back on the Zapatistas’ capacity to remind us what we have in common. The Zapatistas were fighting for land reform and indigenous autonomy in rural Mexico, but they succeeded in communicating a vision of a just society so universal that people all over the world felt included in their struggle. A quarter-century after their uprising, perhaps the most meaningful, lasting lesson from the Zapatista movement is a spark of hope, a sense of what is possible, even in dark and uncertain times. 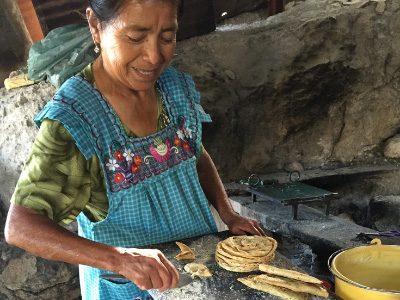