March 8th is International Women’s Day. It’s a day for celebrating the contributions of women to our world, and a day for solidarity.

Gender equity is one of the principles of the fair trade movement, and one of the underpinnings of the just economy that we envision. Yet gender equity is not a single issue. Instead, it is wrapped up in so many aspects of daily life.

Land Rights are a Women’s Issue

Women do more than half of the farm work around the world. Yet too often they are unable to reap the benefits of their labor. Who owns the land, both on paper and by custom, makes a difference. Women can be shut out on the death of a husband or a male relative, or barred from making other important decisions about their – and their families’ – livelihoods. Landesa tells the story of Katherine, and what land rights mean for her mango crop.

Healthcare is a Women’s Issue

Access to health care, especially maternal healthcare, is actually something we do tend to think of as a women’s issue. But, as Abide Awesso shares, health is an issue that has ripple effects out into the community. When childbirth is deadly, children can be left impoverished and communities struggle. Good healthcare allows them all an opportunity to thrive.

Environmental Issues are a Women’s Issue

Agribusiness expansion, mining, and illegal logging are causing environmental degradation around the globe. Women are often at the front lines of defending land rights, and women, especially indigenous women, are particularly vulnerable to the violent acts of the corporate and government powers who seek to seize land and resources.   Berta Caceres’s death caused an international outcry, yet her struggle is not unique, and it seems that every year the number of environmental defenders who die increases.

Fair Wages are a Women’s Issue 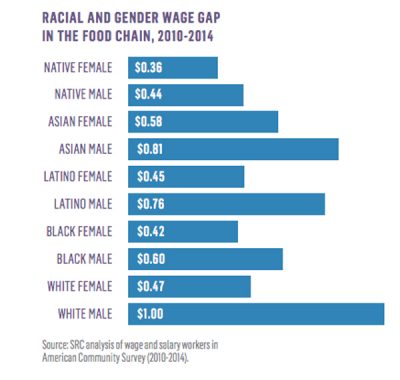 Around the globe, across multiple industries, workers struggle to earn a living wage. A report from the Food Chain Workers Alliance finds that the workers who produce, process, handle, and sell our food had median earnings of just $10/hour in 2016. Yet there is a significant racial and gender gap in those earnings as well.

Workers’ Rights are a Women’s Issue

Safe working conditions, fair pay, freedom from discrimination and harassment, and dignity: we all deserve these things at work. Yet too often these basic rights get forgotten in the crushing demand to produce ever more, cheaper, faster. Women and those most vulnerable (for example, workers without legal immigration status) are often most impacted. But everyone stands to benefit from solutions that seek to address the root causes of these abuses: the imbalance of power in the workplace.

Food Sovereignty is a Women’s Issue

La Via Campesina, the global movement of small-scale farmers, peasants, landless, rural, and indigenous peoples, is clear: without women’s rights, there can be no true food sovereignty. In the words of Elizabeth Mpofu, General Coordinator of La Via Campesina, “Women are the custodians of seeds and play a big role in keeping cultural eating habits and traditional practices alive…They know the best [seed] varieties and their importance to family health, as well as how to preserve heirloom seeds. Women’s experiences with these crops…[are] a formidable tide that goes against corporate seed industries seeking to control and homogenize our food systems.”

Fair Trade is a Women’s Issue

Fair trade supports the empowerment of women and girls in communities around the globe. For some, it offers a market for their traditional crafts. For others, it offers opportunities to grow their own organization and build power within their communities. It’s been several years since our Executive Director, Dana Geffner, sat down with Yolanda, a member of a cooperative of Maya weavers working with Maya Traditions, but their conversation reflects the myriad ways that fair trade can support women and the power of women organizing to make change in their communities.

Land rights, water rights, workers’ rights, traditional foodways, indigenous rights, racial justice: these are all women’s issues. These are all things that get exploited in the quest to grow and produce more, produce faster and cheaper. This International Women’s Day as we stand to declare solidarity with women around the globe, my challenge to all of us is to reflect on the interconnectedness of these issues. Let us make our solidarity more than a sentiment to take hands with those who look most like us. Instead, let us make our solidarity an ongoing commitment to build a more fair world, and to transform the systems that exploit people and the planet. Let us do it not one day in March, but every day, in all our communities.

1 thought on “A Fair World is a Women’s Issue”