In recent history, the US has had both an embargo against Nicaragua and partnered on the Central America Free Trade Agreement with Nicaragua and other countries. In the history of fair trade, Nicaragua plays a key role, being the first country Equal Exchange, pioneers of fair trade in the US, imported coffee from, an act of resistance to the US embargo of the 1980s. Today, some of our favorite companies, like Maggie’s Organics and Cooperative Coffees, partner with co-ops producing coffee, cotton, and other agricultural products in Nicaragua. So we jumped at the opportunity to travel there and meet up with Chris Treter from Higher Grounds and Matt Early from Just Coffee Co-op, along with the film crew from Connected by Coffee, Aaron, Chelsea, and Mario. By the time we arrived, the five of them had already traveled through Mexico, Guatemala, and El Salvador visiting with communities and coffee co-ops. We met up with them on their last leg for their meeting with leaders of FEM (Fundacion Entre Mujeres) in their office in Esteli and to meet with two of the co-ops within their communities that FEM helped organize. 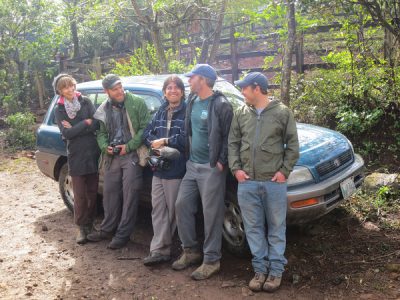 But first we made a few stops of our own. In Granada, a lovely colonial town, we learned of Building New Hope’s community work including an animal clinic where they take in abused animals as well as spay and neuter animals to try to keep the population of strays down, and a small school where we learned that most kids in Nicaragua go to school only a half day, morning or afternoon, as they cannot afford enough teachers for kids to go all day. 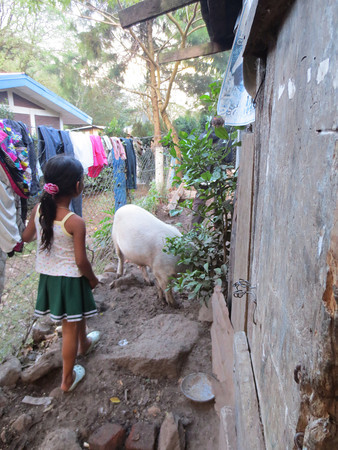 From there, we visited a women’s basket co-op by the Honduras border, where in our broken Spanish we learned a bit about their work. The women collect pine needles from their own land and sew them together to create beautiful baskets. Collectively they share the money from the sales of these baskets to help feed their families and sustain their community.

A few long, lonely roads later and we finally met Chris, Matt, and the team. FEM is especially inspiring because of their holistic approach, focused on both economic and social issues that affect the women they work with, ranging from addressing domestic violence to providing a revolving packet of seeds, chickens, and pigs so families can feed themselves. When we were there, they were completing a project rebuilding houses lost in a landslide two years ago (see the photo for an example of the damage). The rebuild project included cook stoves and composting latrines for many of the houses.

The co-op members are now facing a crisis of another sort. They are being faced with the possibility of cutting down all of their coffee plants and having no harvest for 3-4 years while a new crop of seedlings are planted and matured. The culprit is a fungus call la roya or coffee leaf rust, and its growth is linked to global warming. It was only in the weeks before we arrived, when it started raining in the normally dry season, that it became clear how bad the fungus was this year and that it will devastate the family’s crops. (Pictured is a coffee plant affected by La Roya.  It is one of the many plants that will have to be removed from the devastated plantation pictured below.) 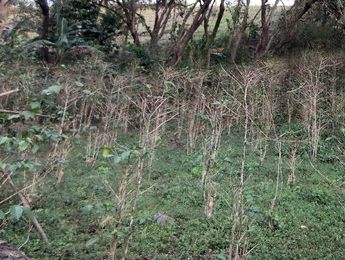 Both FEM and the women themselves are scrambling to figure out how to deal with the possibility, with options including diversifying products, and, for some, emigration to look for jobs in neighboring Costa Rica. At the same time, Chris and Matt are scrambling to figure out how their companies can support these co-ops over the next few years. A key to fair trade is building long-term relationships and that means not jumping ship even if there is literally no coffee to buy for several years.

The web series documenting Chris and Matt’s journey is a great snapshot of both the challenges and inspirational work happening on the ground in coffee communities throughout Central America. Aaron and Chelsea will continue to work on throughout the spring with their own independent documentary, Connected by Coffee. Through the videos and documentary, coffee producers, community members, and local activists will have a voice, telling us what their struggles, needs, successes, and strategies are. We look forward to hearing these voices and continuing our work together towards a truly just economy.

2 thoughts on “FWP Travels to Nicaragua”